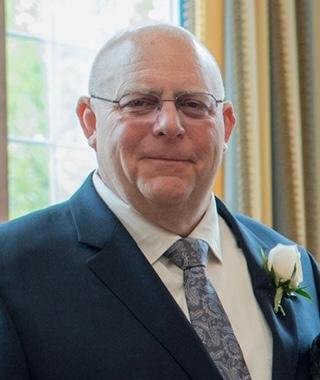 Please share a memory of Richard to include in a keepsake book for family and friends.
View Tribute Book
Richard C. “Lurch” Lorch, 66, of New Britain, CT passed away unexpectedly but peacefully at his home on August 3, 2021. He was born in New Britain on October 6, 1954 to the late Charles and Barbara (Murphy) Lorch. He married the love of his life, Sheree (Achenbach) Lorch, on October 14, 1978 who survives him. Richard leaves behind his loving children Michael and Rebecca (Vereneau) Lorch, Meghan and Cody Gill, and Matthew and Kayleigh (Murphy) Lorch. He will also be missed dearly by his adoring grandchildren: Madison and Ryan Lorch, Landon and soon-to-be baby girl Gill, and Hadley and Harper Lorch. “Grandpa”, “Grampy”, “Pops” was extremely involved in his children’s lives and he adored each one of his grandchildren. They truly were the apple of his eye and cherished the time he had with them. Richard is also survived by his siblings Jane (Lorch) and Dan Murphy and Beth (Lorch) Nigro, as well as his sister in-law Donna (Achenbach) and James Bell. He leaves behind many cousins, nieces, and nephews who he loved dearly. Rich was a proud graduate of the NBHS Class of ’73. He played center on the varsity football team, and was manager of the varsity baseball team, all where he made lifelong friends and memories. He attended CCSU and was a member of the Delta Kappa Chi fraternity. He later went on to graduate from Greater Hartford Community College. He then chose to pursue a career with the Department of Corrections where he was donned the nickname “Lurch”. He began his profession at Somers Correctional Institute followed by Hartford Correctional Center and later, rounded out his career at UCONN Health Center. He retired with the rank of Lieutenant after almost 30 years of service. Rich was a lifelong servant of his community. He demonstrated his pride of New Britain through his coaching of youth tee-ball, baseball (Fagan & Mangan League, JC Junior/Seniors, Legion, NBHS Baseball & Softball), youth (PAL) and high school football (NBHS/ Plainville) for a culmination of more than 40 years. He dedicated his time and knowledge of the sports he loved to many of the youth in New Britain and Plainville. Rich was also a proud supporter of the NBHS Marching Band. He served the City of New Britain through various appointed positions such as: Board of Assessments Appeals, Parks and Recreation Commission, and Police Commission. He was also well known as a golf course ranger at Stanley Golf Course. The golf course was his home away from home. He was a season pass holder and member of the “Putt Whackers” league. He always enjoyed meeting new people as well as seeing and connecting with friends, all while on duty making his rounds. He prided himself on giving tips to golfers on how to play certain holes, having great conversation with patrons, and being a visible icon, all with a cigar in hand. Rich was a staple at SGC. He always enjoyed lunches, laughs and libations with his family and friends at the Back 9 Tavern as well as the New Britain Elks Lodge 957 where he was a lifelong member. Rich will be fondly remembered for his infectious boisterous laughter and booming voice, fine cigars, a great supervisor for home projects aka “Director of Field Operations”, lasting friendships, and endless devotion to his family. Thank you to the New Britain EMS, NBFD and NBPD for their assistance and professionalism. We would like also like to thank all of our family and friends for being supportive through this difficult time and expressing all of your kind words, love, and memories. You will be tremendously missed by many but our memories of you will last a lifetime. A Funeral Service will be held on Tuesday, August 10, 2021 at 10:30 a.m. at South Church, 90 Main Street, New Britain CT, 06051. We ask family and friends to meet directly at the church. If the church lot is full, please utilize the Szczesny Parking Garage next to the NBPD. NBPD officers will be assisting with foot traffic to and from the church/ garage. Masks are recommended inside the church. Calling hours and celebration of “Lurch’s” life will be held Monday, August 9, 2021 from 3:00 to 7:00 p.m. at Farrell Funeral Home, 110 Franklin Square, New Britain, CT 06051. In lieu of flowers, please consider donating in his name to the NBHS Athletics, 110 Mill Street, New Britain, CT 06051.
To plant a beautiful memorial tree in memory of Richard Lorch, please visit our Tree Store
Monday
9
August