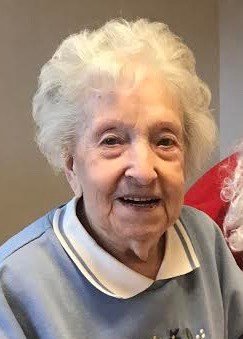 Please share a memory of Mary to include in a keepsake book for family and friends.
View Tribute Book
Mary T. (Geraci) Salerno, 99, of Berlin, passed away peacefully on Friday (April 16, 2021) at Grandview Rehabilitation Healthcare Center. Born in Priolo, Sicily, Italy, the daughter of the late Luciano and Barbara (Buccheri) Geraci, she lived most of her life in New Britain, moving to Berlin over 15 years ago. She was married for 68 years to the love of her life, the late Frank J. Salerno, who died Sept. 19, 2014. After completing eighth grade at St. Mary’s School in New Britain, she began a long career as a seamstress working for a number of companies including Sokol Brothers, American Bazaar, and Yardstick Decorators. She also served as of the Chairwoman of the Local Chapter of the United Garment Workers Union. During retirement, she continued to sew custom draperies at home. Mary is survived by two sons, Robert and his wife Mary Salerno of Berlin and Francis Salerno of Encinitas, CA; her cherished grandchildren Angela and her husband, Bryce Crapser, Lisa and her husband Chris Valentine and Robert A. Salerno. Mary was also blessed with three great grandchildren, Leah, Oliver and Noah. She is survived by two sisters, Constance Dilorenzo and Viola Salonia and several nieces and nephews. Mary was predeceased by her oldest sister Anna Lanza. Funeral services will be held Friday (April 23, 2021) with a Mass of Christian Burial at 10:00 AM at St. Paul’s Church 485 Alling St. Kensington. Burial will follow in St. Mary Cemetery, New Britain. Visitation will be Friday from 8:30 to 9:30 AM at the Farrell Funeral Home 110 Franklin Sq. New Britain. Masks are required and social distances guidelines will be followed. In lieu of flowers, donations may be made to the Alzheimer's Association Connecticut Chapter 200 Executive Blvd S #4b, Southington, CT 06489.
To plant a beautiful memorial tree in memory of Mary Salerno, please visit our Tree Store
Friday
23
April