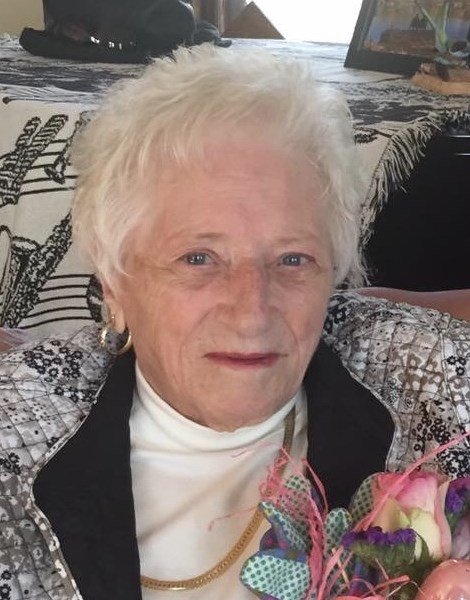 Please share a memory of Pierina to include in a keepsake book for family and friends.
View Tribute Book
Pierina, aka Pietra, Teodoro, 97, formerly of New Britain, died Thursday (Nov. 19, 2020) after a short stay at an area convalescent home. Born in Corleone, Province of Palermo, Sicily, she lived in Solarino, Sicily for approximately 17 years where she had three of her four children. She came to New Britain in 1957 with her young family and lived the last four years in Berlin, with her daughter, Paula. The daughter of the late Lorenzo and Antoinetta (Vapore) Terzo, she was the wife of the late Concetto Teodoro. Pierina was energetic, creative and an expert seam stress. After a full day of work at Fafnir Bearing and making dinner preparations, she would excitedly cut out a new dress pattern, sew it and wear it the next day to work. She was the center of family gatherings providing abundant home cooked meals, including pots of sauce with meatballs and sausage, pizza and spinach pies. She was meticulous about her house and took pleasure in updating the interior furnishings with each changing season. Pierina was a warm and kind soul. She was grateful for all her friends, family and loved ones and those that helped her through her later years, including Patrycja, Ursula and especially Bozena. Mrs. Teodoro is survived by her children Vincent and his wife Diane Teodoro of Bristol; Paul and his wife Susan Teodoro of New Britain; and Paula and her husband Raymond Archacki, Jr. of Berlin; her grandchildren Patti Johnson, James Teodoro, Marc Gonsalves, Michael Gonsalves, Raymond Archacki III, Lea Koehnken and Angela Teodoro and nine great grandchildren Marena, Brooke, Savanna, Destiny, Brianna, Sara, Austin, Andrew and Shea along with several nieces and nephews. She was predeceased by her daughter Josephine Rosano and grandson, Anthony Teodoro, both of Bristol. Funeral services will be held Monday (Nov. 23, 2020) at 11:00 AM at the Farrell Funeral Home 110 Franklin Sq. New Britain. Burial will follow in St. Mary Cemetery, New Britain. Visitation will be Monday from 10:00 to 11:00 AM at the funeral home. Due to the pandemic, everyone is asked to wear masks and practice social distancing.
To plant a beautiful memorial tree in memory of Pierina Teodoro, please visit our Tree Store
Monday
23
November

Due to the pandemic, everyone is asked to wear masks and practice social distancing
Online Memory & Photo Sharing Event
Online Event
About this Event