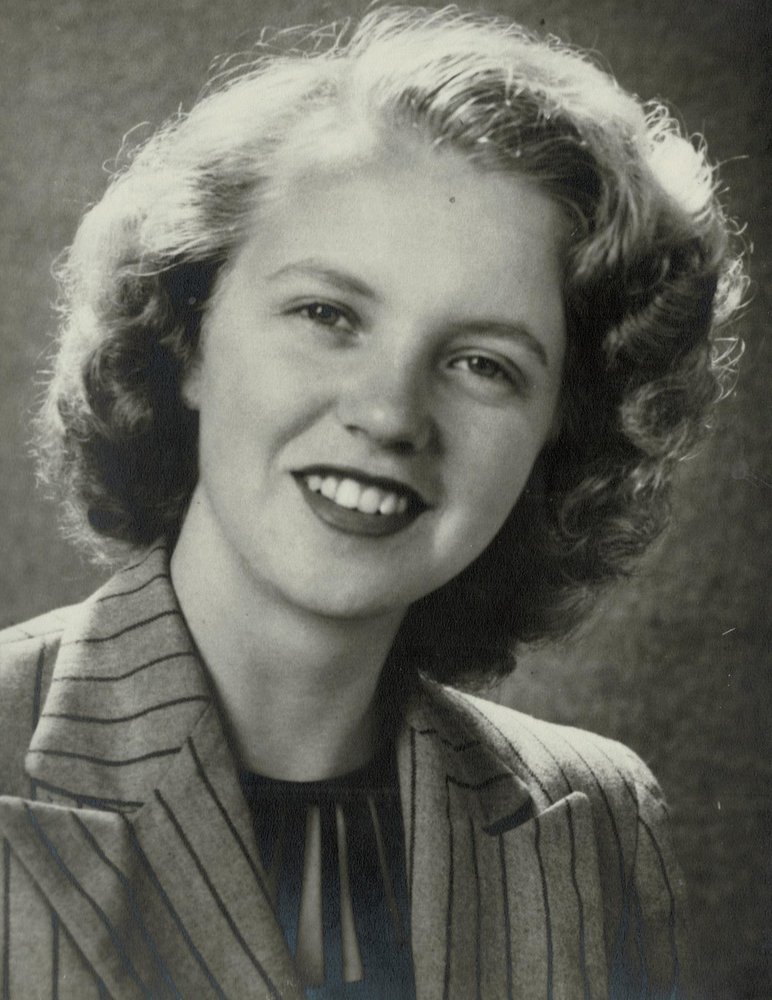 Obituary of Joyce I. Giedraitis

Please share a memory of Joyce to include in a keepsake book for family and friends.
View Tribute Book
Joyce Irene Thorkelson Giedraitis was born to Jon Agust (Afi, Gusti) and Jonina Larusson in Gimli, Manitoba, Canada on January 18, 1929. She passed away on September 7th in her final earthly home, in Vernon, CT, where she thrived with her husband, Vincent Giedraitis. Joyce’s birth was followed by the births of her siblings, Clifford, John (Jack) and Carol Ann (Valdine). Joyce attended Gimli schools and she grew up next to Betel, the town’s beloved “Old Folks Home.” Over the years, she has shared her memories with us of the time she spent with her favorite Betel residents. Vin and Joyce’s home in Vernon, a renovated church, became their own “Betel” (meaning House of God) in their later years. Her childhood in Gimli, “New Iceland,” was rich with culture, especially BOOKS and stories. There was heartache when families lost loved ones in the fishing industry and the harsh conditions on Lake Winnipeg but she was supported and loved in a close knit community, by Gusti, Jonina, Clifford, Jack, Valdine, Mrs. Mac, her extended family and caring friends. Joyce grew up speaking Icelandic and English, something she was very proud of. She was a successful student and graduated from high school with big dreams. She attended the University of Manitoba in nearby Winnipeg, earning a B.S. in Home Economics with the high honor of being the head of her class. One of her memorable accomplishments, as a young adult, was teaching students of grades one through eight in a one room school house in South Arnes, near Gimli. Joyce managed Lakeside Trading Company, her father’s store, after graduating from the University of Manitoba. She then realized that she was craving knowledge in the essential subjects of Philosophy and Literature. She took her earnings and enrolled at McGill University in Montreal. Of course, it was her destiny to fall in love with handsome and charming Vincent at McGill. She accepted his proposal when he drove across Canada with an engagement ring for his “elskan” (beloved). They married in East Hampton CT. in 1951. Joyce mustered the courage, energy and devotion to fulfill her dreams for the next 70 years. Amidst the births of eight children, she supported Vin through his first jobs as he completed Law School. She was pleased to be naturalized as an American. She set up households for their growing family in Endicott, NY, and then in the Connecticut towns of East Hartford, Wethersfield, West Hartford and finally, Vernon. In each town there were neighbors to meet, churches and schools to connect with, libraries, museums, parks and trails to explore with her children. She regularly planned and packed for her large family on trips to East Hampton, Madison Beach, Harwinton Pond, Sunapee NH and elsewhere on the East Coast. This amazing woman maintained her love affair with Vin and with life. She enjoyed college classes and lectures around Hartford and nourished herself and her family with newspapers, BOOKS, magazines, theater, movies, art and travel. When the kids were grown, Vin and Joyce became very involved with ballroom dancing and with the lasting friendships that resulted. They took marvelous trips to Colorado, California, Texas, Canada, Iceland, Lithuania, Israel, Greece and Rome. Joyce especially treasured her memories of visits to Gimli where she would renew her ties to loved ones. And with gratitude, she found family members in Iceland to hold close to her heart. Joyce remained proud of her Icelandic heritage. She shared her joys as well as her trials with all of us. She was preceded in death by her devoted spouse, Vincent, her parents, Gusti and Jonina; her brothers, Clifford and John; her sister, Valdine and her daughter Cynthia Heidari. We are left to carry on Joyce’s legacy of her love of life and her faithfulness to family and friends. We all thank you, Mom, Grandma, Great-Grandma: your daughter Paula, husband William Marlatt and their children, Weston, Logan and Jessi; your daughter Marie, husband Doug Edgar and their children, Leith, Ian and Daron; your son Damian Vincent, wife Janice Jacobsen and sons, Jason and Marshall; your son-in-law, Morteza Heidari, and son Brayden Hade; your daughter Rita Dumont, husband Tom Tkacz and their children Cari-Anne, Michelle, Jen, Leanne, Jennifer, Thomas and Noelle; your son Andrew and his children Jonathan and Brittany; your daughter Margo Donaghue, husband Tim Duca and her children Tarah, Vincent and Troy; your daughter Connie Green and her son Joseph. Joyce felt a special calling to be “gramma” to her many grandchildren and she cherished her 13+ great-grandchildren. Joyce became a Catholic at the time of her marriage. Our family belonged to several Catholic parishes over the years: Sacred Heart in Wethersfield, St. Helena in West Hartford, Sacred Heart in Vernon and St. Andrew’s (Lithuanian) of Holy Apostles in New Britain. Friends and family are invited to a visitation on Monday (September 14th ) from 12:00 - 2:00 PM with a Prayer Service at 2:00 at the Farrell Funeral Home, 110 Franklin Sq. New Britain. Burial will follow in St. Mary’s Cemetery, New Britain.
To plant a beautiful memorial tree in memory of Joyce Giedraitis, please visit our Tree Store
Monday
14
September

Masks are required while in the funeral home.
Online Memory & Photo Sharing Event
Online Event
About this Event