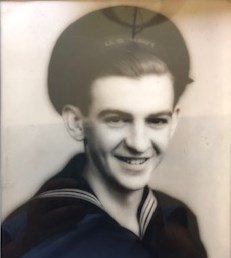 Please share a memory of Vincent to include in a keepsake book for family and friends.
View Tribute Book
Vincent John Giedraitis was born to Helen and Charles on June 15, 1925 in his first home in New Britain, CT. He passed away on Monday August 10th, in the home he loved and cared for in Eastern Connecticut. Vin’s life was long and full. He played, studied and worked with determination and great satisfaction. He graduated from New Britain High School and then served in the Navy as a radar engineer on the U.S. John Bole destroyer in WWII. Vin was grateful and delighted to have survived the war. He would take advantage of his good fortune. He attended Central Connecticut State College and graduated from McGill University with a B.A. in Philosophy. While at McGill he met the love of his life Joyce (Thorkelson) and they were married for over 70 years. The settled in Connecticut, while raising their family, he went on to earn his Law Degree at the UConn Law School. He worked for IBM, Aetna Insurance, Fuller Brush and then established his private law practice in Hartford. He became a Public Defender for the City of Hartford and then for the town of Vernon-Rockville. Vin balanced many interests and hobbies with his work, with his valued friendships and his vibrant family life. He was an avid skier and fisherman. He enjoyed tennis, ballroom dancing, boating, golf and making a yearly batch of wild grape jelly. Vin was preceded in death by his parents, Helen and Charles; his brothers, Raymond, Donald and Thomas; his sister, Jane; and his daughter, Cynthia (Morteza) Heidari. He is survived by Joyce his beloved wife, and his youngest brother, Edward. Vin’s children and grandchildren mourn his passing: his daughter Paula and her husband William Marlatt and their children, Weston, Logan and Jessi; his daughter Marie and her husband, Doug Edgar and their children, Leith, Ian and Daron; his son Damian Vincent and his wife Janice Jacobsen and sons Jason and Marshall; his daughter Cynthia who preceded him in death and her husband Morteza Heidari and their son Brayden; his daughter Rita Dumont and her husband Tom Tkacz and children Jen, Leanne, Jennifer, Thomas, Noelle, Cari-Anne, and Michelle; his son Andrew and his children Jonathan and Brittany; his daughter Margo Donaghue and her husband Timothy Duca and children Tarah, Vincent and Troy; his daughter Connie Green and her son Joseph. His cherished grandchildren have filled his life and home with joyous celebrations, rewarding conversations and with the delight of 13+ great grandchildren. Vin and family enjoyed being part of several Catholic parishes over the years: Sacred Heart in Wethersfield, St. Helena in West Hartford and St. Andrew’s (Lithuanian) of Holy Apostles in New Britain. Friends and family are invited to a visitation on Thursday (Aug 20th) from 12:00 - 2:00 PM with a Prayer Service at 2:00 at the Farrell Funeral Home, 110 Franklin Sq. New Britain. Burial with Military Honors will follow in St. Mary’s Cemetery, New Britain.
To plant a beautiful memorial tree in memory of Vincent Giedraitis, please visit our Tree Store
Thursday
20
August