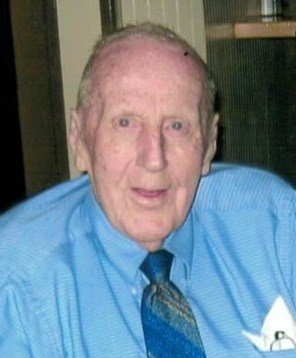 Please share a memory of Robert to include in a keepsake book for family and friends.
View Tribute Book
Robert G. Anderson, 91, of Newington, cherished father, brother, uncle and grandfather peacefully passed on Wednesday, April 15, 2020, at home surrounded by his family. He was the loving husband of the late Marian (Selander) Anderson. Born on June 29th, 1928, in New Britain, he was the son of the late Harold and Sarah (Leadine) Anderson. Robert was blessed with a good life. He was a proud WWII Veteran, Robert was honorably discharged from the army in 1952. In 1953 Robert completed the building of his lifelong home which he shared with his wife and two children. Robert worked for Pratt and Whitney, Atrax and Travelers which he retired from in 1987. Robert and Marian loved to travel, they took a cross-country trip across the U.S., vacationed on numerous cruise ships, and for several years spent many winter weeks in Florida. Nicknamed “Smokey” Robert would spend countless summers camping at Witch Meadow Campground with his wife, daughter, and grandchildren. Robert was most fulfilled when spending time with family and friends. Robert was the loving father of son Glenn Anderson and fiancee Barbara Palmer, and daughter Sheryl Anderson; adored grandfather of Nikki Vernacatola (Raymond), Kayle Salwocki (Shane), Breena Proctor (Kelsey), Stephanie Anderson, and Jeffrey Anderson; adored great grandfather to Avery, Kase, and Rylan Vernacatola, and Skyler Anderson. He was a devoted brother to Don Anderson (Linda), and Marilyn Anderson (Richard); he was predeceased by his brothers Richard and Leonard Anderson. Robert’s family would like to send appreciation and gratitude to Mirna Ayala, his best friend and caretaker for many years. The family would also like to thank Maxwell Agyapong and Hartford Healthcare Hospice for their wonderful care in his final days. Due to the restrictions imposed by the COVID-19 virus, a Private Burial with Military Honors will be held by the immediate family only. A celebration of life memorial will be announced at a later date when friends and family can gather safely. Robert will be laid to rest at West Meadow Cemetery, Newington. In lieu of flowers donations may be made to VA Hospital of Newington, 555 Willard Ave. Newington CT 06111.
To plant a beautiful memorial tree in memory of Robert Anderson, please visit our Tree Store