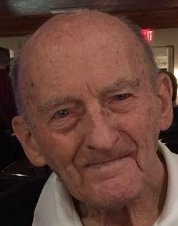 Edward John Zeranski (Eddie), 93, formerly of New Britain, died Sunday, October 27, 2019. Born in New Britain, he was a carpenter by trade. He was a U.S. Army Veteran having served during World War II, and was predeceased by his wife, Loretta.

Eddie was a devoted father and grandfather.  He was his children’s and grandchildren’s biggest fan, never missing an athletic event, awards ceremony, or birthday celebration.  He loved taking rides to Hammonassett, watching football, and indulging in his favorite treats including ice cream, donuts, and homemade pies.