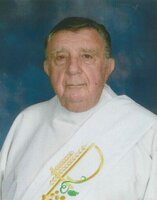 On Monday, August 23, Deacon Carmelo A. Guzzardi, passed into his heavenly home and into the arms of our loving God. Born to Paul and Bridget Guzzardi on January 17, 1935, Carmen enjoyed growing up in New Britain, Connecticut and attended public schools there. He served in the United States Air Force in Amarillo, Texas. After completing his service and being honorably discharged, he was happy to come back home and went on to graduate from Central Connecticut State University and the University of New Haven, later becoming a Certified Public Accountant. Carmen worked as a Special Agent and Group Manager for the Criminal Investigation Division of the Internal Revenue Service of the U.S. Treasury Department. Retiring after 23 years of service, Carmen entered into private practice providing mainly litigation support. He entered yet another career field when he was offered a position of Instructor of Accounting and Taxes at Tunxis Community College. He was subsequently appointed as Acting Dean of Administration, and shortly thereafter, permanently appointed as such. Carmen’s most rewarding vocation was working with the Franciscan Friars as a Permanent Deacon in service to his beloved parishioners at St. Paul Church of Kensington for the past 27 years. Carmen is survived by his wife of 57 years, Linda (Labieniec) Guzzardi, his four children of whom he was most proud and their spouses whom he loved as his own: Christopher and Linda Marie Connolly, Thomas and Jennifer Nagel, Brett and Elizabeth Carroll, and Paul and Kristina Guzzardi; eight grandchildren (the source of his greatest joy) Thomas, Bridget and Linda Ann Connolly, Emma Nagel, Meghan and Jackson Carroll, and Anthony (AJ) and Sara Guzzardi. He also leaves behind his sister Mary Curry and his brother and sister-in-law, Paul and Francine Guzzardi, and a large and wonderful extended family. He was predeceased by his parents and his sister Ann Watson. Carmen loved much and was much loved by so many. He will be missed. Friends and family are invited to a visitation on Saturday, August 28 from 9:00-11:00 AM at St. Paul Church, 485 Alling Street, Kensington and will be immediately followed by a Mass of Christian Burial at 11:30 AM. Burial will be private at a later time at the convenience of the family. In lieu of flowers, memorial donations may be made to St. Paul Church, Kensington Connecticut or to the Franciscan Friars c/o 479 Alling St. Kensington, CT 06037.