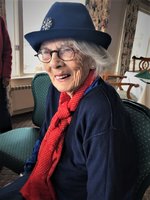 Marilyn M. Slater of New Britain, CT passed away peacefully on September 10, 2020 at the age of 95. Her family was with her as she passed. She was born in Providence, RI. During her childhood, she lived in the Boston area and later, in Jersey City where she graduated from Lincoln High School. On her initiative and with her signature determination, she graduated with a nursing degree from Jersey City Medical Center in 1946. Within a year of her graduation, she married Dr. Gregory Slater, and after several months, she joined him in Italy, while he completed his military service. Thus, Marilyn's storied tale had begun. Marilyn's adventurous, "ready to go anywhere", spirit matched with her appreciation for nature was reflected in her many pursuits: from golf, tennis, skiing and even scuba diving; to gardening, beekeeping, and fine cooking; to traveling to far-off places , such as, volunteering in Afghanistan in 1975 with her physician husband. During Marilyn's middle years, she returned to school and enrolled in an adult college program. In 1973, she graduated from Goddard College with a BA degree. Marilyn enjoyed the challenge of learning, whether it was studying Spanish or Japanese at a nearby college or learning the art of weaving. In 1986, she traveled to Japan. There, she learned skills in Japanese weaving at the Kawashima Textile School in Kyoto. This experience was the beginning of a lifelong love and appreciation for Japan's people and their culture. For Marilyn, weaving nurtured her artistic inclinations and gave her much satisfaction. Along the way, Marilyn was a member of the Handweavers' Guild of CT, the Connecticut Horticultural Society, the Shuttle Meadow Country Club, and the New Britain Garden Club. Marilyn was predeceased by her husband, Dr. Gregory Slater and her sons, Peter and Timothy, and her baby daughter, Jennifer. She is survived by her cherished granddaughter, Lauren, and her sons, Jon and Gregory. A gathering of family and friends will take place at the Farrell Funeral Home on Oct. 24 at 11 AM, followed by a burial at Maple Cemetery. For information contact the funeral home at (860) 225-8464.