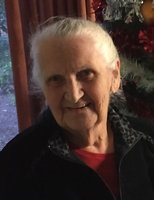 Pamelia Jones Hayward passed away peacefully in her sleep the morning of May 2nd at Saint Mary Home, West Hartford, Connecticut. She was 92 years old. A native of Middleboro, Massachusetts, Pam and her husband, H. John Hayward (d. 1993), moved to Bridgton, Maine in 1960 where they raised their four children, Scott (Avis), Charles (Betsy), Jeffrey (Robin), and Barbara (Chris Aiudi). Known for her eye for collectibles and gift of conversation, she operated Pam’s Potpourri for over forty years, an antique shop frequented by summer residents and antique dealer friends from around the country. In addition to her adult children, she leaves behind six grandchildren, and two great-grandchildren. Pam was pre-deceased by her twin sister, Barbara Stephens, two other sisters, Eunice Perez and Lillian Prost, and her brother, Robert Jones, Jr. A private burial will be held at St. Mary’s Cemetery, New Britain. A celebration of her life will be scheduled at a later date.